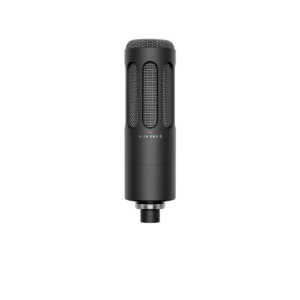 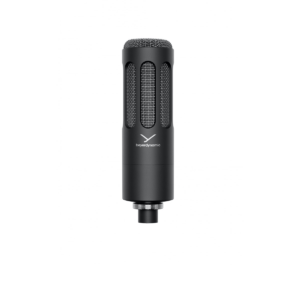 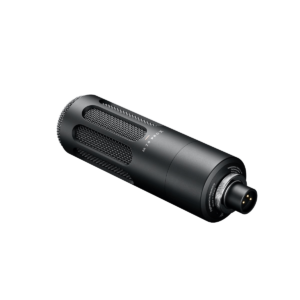 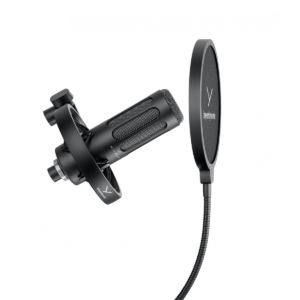 The all-in-one microphone
The beyerdynamic M 70 Pro X is a dynamic microphone for recording speech and vocals and is part of the Pro X series launched by the company in 2021. It features an extended frequency response and delivers high-resolution sounds in professional recording quality. The microphone’s capsule is internally mounted in a way that effectively prevents the transmission of mechanical vibrations, and the scope of delivery includes a pop filter with a gooseneck mount, which suppresses unwanted noises such as plosives. The accessories supplied also include a carrying case and an elastic shock mount to allow the M 70 Pro X to be used with a microphone stand.

For enhanced clarity
The M 70 Pro X is a dynamic microphone with a cardioid polar pattern, and it is configured specifically to the human voice. According to the manufacturer’s specifications, the mic features a boost at 4 kHz and also at 8 kHz, which gives voice recordings greater articulation and clarity. What is more, the M 70 Pro X’s proximity effect is perfectly attuned to close miking and provides an enhanced low end when needed. Due to its fixed cardioid polar pattern, the mic primarily records the sound from sources directly in front of it while effectively suppressing ambient noise interference.

It’s all about the voice
The beyerdynamic M 70 Pro X is clearly designed for the human voice, and it is precisely this characteristic that makes it the ideal choice for prosumers and professional users looking for a microphone specifically for speech and vocals. The microphone’s enhanced presence ensures optimum intelligibility, while its balanced proximity effect gives a pleasant warmth and fullness to the signal. Whether you are a voiceover artist, podcaster, YouTuber, or singer: If you are looking for a suitable microphone, you should definitely take a closer look at the beyerdynamic M 70 Pro X.

About beyerdynamic
beyerdynamic was founded in Berlin in 1924 as a manufacturer of cinema loudspeakers. In 1937, Eugen Beyer developed the DT 48, the first set of dynamic headphones, followed two years later by the M 19 dynamic microphone. After the Second World War, the company moved to Heilbronn, Germany, and now also has a US subsidiary with headquarters in Farmingdale, New York. Beyerdynamic’s most popular products traditionally include headphones and microphones for both live and studio use, and the company also has a strong presence in the consumer and conference technology sectors as well as in the field of installation microphones, interpreter consoles, and tour guide systems.

Excellent for spoken word recordings
The M 70 Pro X is ideal for all applications involving spoken word recording – from audiobook productions, podcasts, and YouTube videos and tutorials through to live gaming streams with narration. But that is not all that this microphone can do: Its clear definition and excellent articulation also make it a suitable choice for singing and vocal recordings. And because the M 70 Pro X emphasises the frequency range that is intrinsic to the human voice, it can also help to ensure the intelligibility of spoken recordings even when the speaker does not always speak clearly.